Activision and Marvel Entertainment have revealed The Amazing Spider-Man 2 video game is planned to launch next spring, alongside the Sony Pictures Entertainment feature film of the same name.

Developed by Beenox, the same game studio behind 2012’s original, this third-person action-adventure video game builds on the story of the previous game with an alternative take on the events of the upcoming movie, while also giving players an enhanced, free-roaming experience through an expanded New York City.

Throughout his journey, Spider-Man will encounter a number of new foes as well as some old friends, as he confronts a new threat to his city. The narrative will give Peter Parker, Spider-Man’s photojournalist persona, a greater role in the spotlight, as he investigates the complicated motivations and unique personalities behind the menagerie of Marvel menaces threatening Manhattan.

Central to the game is the new “Hero or Menace” system, which incentivizes Super Hero behavior by rewarding the web-slinger’s crime-fighting efforts, and adds consequences for letting criminality fester.

The Amazing Spider-Man 2 video game is planned to launch for PlayStation 4, PlayStation 3, Xbox One, Xbox 360, Nintendo Wii U, and Windows PC. 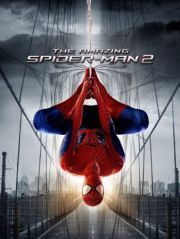