Scribblenauts Unmasked features a story where protagonist Maxwell embarks on an imaginative and comical quest through GOTHAM CITY, METROPOLIS, ATLANTIS and other iconic locales from the DC Comics Universe. In the game, Maxwell comes to the aid of BATMAN, SUPERMAN and the rest of THE JUSTICE LEAGUE as they face the DC Comics Super Villains, such as THE JOKER, LEX LUTHOR and SINESTRO.

A new Hero Creator tool gives players the ability to produce their own Super Heroes or Super-Villains out of anything they can think of in the game. This could mean making a something like a potato, lobster or guitar into your very own customizable Super Hero; or, taking your favorite Super Hero and crossing his/her look and powers with others in the DC Comics universe to create the ultimate combination.

Scribblenauts Unmasked: A DC Comics Adventure is in stores today for Wii U and PC.

BioShock 2
Online
There are currently 0 members and 82 guests on the website right now. Who's On?
Activity in the past 10 minutes: 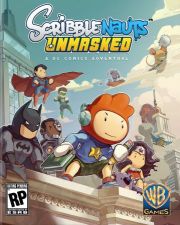