Konami Digital Entertainment GmbH will today release free content and an update for its PES 2010 title for PLAYSTATION 3, Xbox 360 and PC-DVD.
3 new balls and 10 new boots are offered as additional free DLC.
On the other side, the update makes it even easier to use the game’s comprehensive formation settings, and also adds icons to show the connectivity status of online players. All settings can now be saved and Stocked Data will be loaded automatically, speeding up play immediately. Likewise, the new connectivity icons will show the user as a Grey icon, with Green, Yellow and Red icons detailing the quality of the opponent’s connection, with red being the worse.
The update also improves match making between users of the PC-DVD version of the game with different processors.

Pro Evolution Soccer 2017
Online
There are currently 0 members and 132 guests on the website right now. Who's On?
Activity in the past 10 minutes: 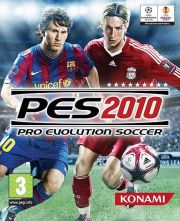