Bethesda Softworks has announced that the DOOM 3 BFG Edition is now available at retail stores across North America.

he BFG Edition features enhanced, re-mastered versions of both DOOM 3 and the Resurrection of Evil add-on pack, as well as new content, including eight new levels entitled ‘The Lost Mission.’

DOOM 3, Resurrection of Evil, and ‘The Lost Mission’ have been optimized in 3D, featuring 5.1 surround sound, Xbox 360 Achievements, PlayStation 3 trophies, improved rendering and lighting, and a new check point save system. id Software has fine-tuned the controls of the DOOM single and multiplayer experience for consoles, and DOOM 3 now features the new armor-mounted flashlight, allowing players to illuminate dark corners and blast enemies at the same time.

“Today we’re bringing back id Software’s genre-defining shooter, with the release of DOOM 3 BFG Edition” said Vlatko Andonov, President, Bethesda Softworks. “We are excited for new and existing fans to play the newly enhanced and extended DOOM 3 – and for them to have the opportunity to play the classic DOOM and DOOM 2 games.”

Rage
Online
There are currently 0 members and 84 guests on the website right now. Who's On?
Activity in the past 10 minutes: 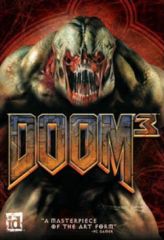