Infamous is a good game, though one that's been overrun these past few months by titles demanding more of people's time/attention. So Sony figured, maybe some DLC will get you spinning the disc back up.
From December 10, the "Gigawatt Blades" superpower - which had previously been available only as a preorder incentive - will be released for free, for everyone. To quote Sony, it performs "massive damage".
Along with the new DLC, Sony also announced that the game will be dropped to $40, have its soundtrack released later this month, and has now sold 1.2 million copies. 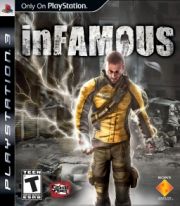