Goblin Menace is an expansion to the action adventure game Trine 2, featuring a new campaign spanning six unique levels and new skills that are also playable in the original game.

In preparation for the Goblin Menace expansion, Trine 2 on Steam has been updated with a major 2 GB patch to make sure the game and the new expansion work together in multiplayer. Some of this work is still ongoing and will bring many long-requested features to all Trine 2 players, including an arrow indicator of other players location in multiplayer, lots of minor gameplay changes and additions and technical fixes.

"We wanted to give our loyal fans something extra and also get some early feedback before the official launch. The Goblin Menace is compatible with the original Trine 2 in multiplayer, and this is one of the areas we want to focus on during the beta test. We've been working on the Goblin Menace for almost a year and are very proud of it." said Lauri Hyvärinen, CEO of Frozenbyte.

Trine 2: Goblin Menace will cost $7.99/6.99 EUR, with a small launch discount for early buyers on Steam. 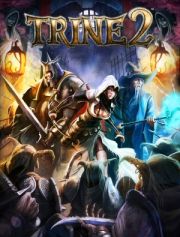