The next installment in the franchise arriving early next year, PC version in the works

Capcom has announced that DmC Devil May Cry, the next installment in the action series, will release on January 15, 2013 in North America and Europe.

In addition, PC gamers will also be able to experience the title with a Windows PC version whose development is well underway and scheduled for release later in 2013.

The game details Dante’s early years set against a contemporary backdrop. While retaining the stylish action, fluid combat and self-assured protagonist that have defined the iconic series, DmC Devil May Cry injects a more brutal and visceral edge to the franchise.

DmC Devil May Cry will be available on Xbox 360 and PlayStation 3, with PC to follow. 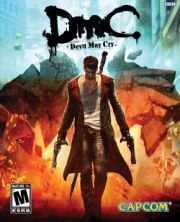 155. Lara Croft and the Guardian of Light
PC

All videos for DmC: Devil May Cry (1)