Namco Bandai Games has announced Armored Core V is gone gold for manufacturing and is set to arrive in stores on March 20, 2012 in North America and on March 23, 2012 in Europe.

“We all know FromSoftware has a great track record of developing quality, highly immersive and addictive games, and Armored Core V will continue that tradition with new layers of strategy,” said Carlson Choi, Vice President of Marketing, Namco.

Developed by FromSoftware, Armored Core V will be released for Xbox 360 and PlayStation 3.

Shadows of the Damned
Online
There are currently 0 members and 111 guests on the website right now. Who's On?
Activity in the past 10 minutes: 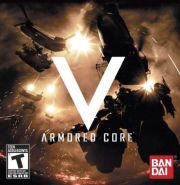