Codemasters has announced DiRT 3 Complete Edition, a box set featuring the racer expanded with over £20 worth of additional content.

DiRT 3 Complete Edition will see the game expanded with 12 new routes across two locations, new cars and a range of liveries (via download on PC).

DiRT 3: Complete Edition will hit retail on March 9th 2012 for the Xbox 360, PlayStation 3, and PC Games For Windows LIVE with a SRP of £29.99. There is no word if a North American version is planned.

The next game in the series, Dirt: Showdown, is set to release in May. 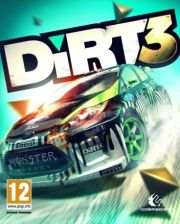 Our Review of DiRT 3
87%
Great
The Verdict:
"Lives up to its predecessor with fun Gymkhana events, less repetitive tracks, no annoying characters and outstanding visuals."
Game Ranking
DiRT 3 is ranked #80 out of 1542 total reviewed games. It is ranked #12 out of 112 games reviewed in 2011.
79. Grand Theft Auto V
Xbox 360
80. DiRT 3