Deep Silver has revealed the limited Collector’s Edition of Risen 2: Dark Waters for consoles that will be released in the UK on April 27th 2012 alongside the standard edition.

The Collector’s Edition will include Making of DVD, Soundtrack CD, Double-sided poster, a Pirate Flag, an Amulet, art cards and stickers.

The Collector’s Edition of Risen 2: Dark Waters will be available for a price of £69.99 on Xbox 360 and PlayStation 3.

In Risen 2: Dark Waters, the Inquisition dispatches the hero to seek a remedy against the monstrous sea creatures that are interfering with the shipping lines, thus cutting off the islands' supplies. The game is set to release on April 24th, 2012 in North America and on April 27th, 2012 in European countries for Xbox 360, PlayStation 3, and Windows PC. 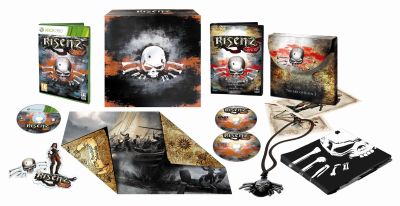