The upcoming fighting game Soulcalibur V may not be in stores yet, but that hasn't stopped Namco Bandai from announcing a set of downloadable content (DLC) to keep fans fighting.

Three packs of DLC are scheduled for February 2012, each priced at €1.99 or 160 MS points in Europe (North American details to follow) and feature exclusive new customization items and music that players can then unlock in-game.

Developed by the Project Soul team at Namco Bandai, Soulcalibur V picks up 17 years after the events of the previous game with new heroes and returning warriors clashing in a showdown between good and evil. The game will hit stores January 31st in North America and February 3rd in Europe for Xbox 360 and PlayStation 3.

SoulCalibur V downloadable next week
Soulcalibur V getting an update, costumes DLC
SoulCalibur V gone gold
Prev:
Wii U to release in 2012, Nintendo Network announced
Next:
Alan Wake to release at retail for PC in Europe 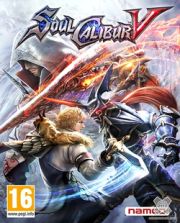 All videos for Soulcalibur V (2)