New retail edition of RPG to include all DLC content

Along with new areas to explore, each of the four main add-on packs increases the maximum level cap by five levels, ultimately raising the cap to level 50.

Fallout: New Vegas Ultimate Edition will be available in North America on February 7th 2012 and throughout Europe on February 10th for Xbox 360, PlayStation 3, and Windows PC. 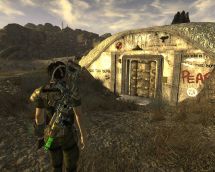