EA Sports has announced that a title update is expected to be released on November 5th that addresses alot of issue that the community has brought forward since the release of the game.

Full details of the patch

Alot of gameplay tweaks have been implemented that the fans have asked for, however one issue remained un-mentioned by the notes - the freezing that many players have reported in Be a GM mode.

We contacted EA Sports for comment, and this morning got a reply:

"We are aware of the freezing issues that people have been experiencing on NHL 10. With the community’s help we identified these and our development team has addressed many of these issues in an upcoming title update. Even though our games go through many months of quality checking, some things slip through."

This certainly brings alot of promise to those with the issue (myself included). At this time it's also been spotted that the patch notes on the forums have been updated to reflect the information.

So those with freezing issues will have to hold off till November 7th to see if the Title update resolves the problem. Until then, let's watch some real hockey!

*** UPDATE: The patch was released a week early, and is now ready to download. 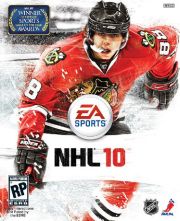