To kick off San Diego Comic-Con 2011, Activision and Marvel Entertainment have announced the top-tier celebrity actors that will voice characters in the upcoming Spider-Man: Edge of Time video game.

The anticipated Spider-Man: Edge of Time game will feature legendary film star Val Kilmer as Walker Sloan, Smallville and V mainstay Laura Vandervoort as Mary Jane, and Katee Sackhoff, who played Lieutenant Starbuck from Battlestar Galactica,makes her debut as the Black Cat.
"These amazing casts of talented Hollywood actors help bring the rich storylines of Spider-Man: Edge of Time to life," said Vicharin Vadakan, Director of Marketing, Activision Publishing. "Players this fall will get to control the destinyof their own mutants or save Spider-Man and through this voice talent feel like they are part of the action."

Comic-Con fans can also catch the stars from Spider-Man: Edge of Time at the Activision Marvel Video Games Panel where they will join legendary comic creator Stan Lee, Marvel writer Peter David and Beenox Studio Head Dee Brown, among others, to discuss the latest Super Hero adventures and their roles in the upcoming video games. The panel will take place on Saturday, July 23, at 10:00am.

Spider-Man: Edge of Time is being developed by Beenox for Xbox 360 and PlayStation 3.

Amazing Spider-Man
Online
There are currently 0 members and 113 guests on the website right now. Who's On?
Activity in the past 10 minutes: 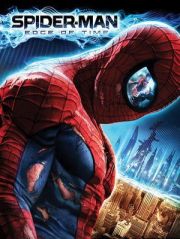 All videos for Spider-Man: Edge of Time (1)