Wrestling game returns with a showcase based on John Cena

2K has announced WWE 2K23, the newest installment of the flagship WWE video game franchise developed by Visual Concepts, will be releasing this March 2023.

In celebration of his 20th anniversary as a WWE Superstar, 16-time World Champion, John Cena, will be featured on the cover of each edition of the game, striking three of his signature poses.

The Icon Edition will be available for $119.99 USD for PS4, PS5, Xbox Series X|S, Xbox One, and PC. In addition to the Standard Edition and all bonus content included in the Deluxe Edition, the Icon Edition includes the Ruthless Aggression Pack, as well as “Leviathan” Batista, developmental rookie versions of Brock Lesnar and Randy Orton, the John Cena Legacy Championship and WrestleMania 22 Arena. Additional bonus content includes an Emerald Paul Heyman MyFACTION Manager Card, and three Deluxe Premium Launch MyFACTION Card Packs. The Icon Edition will be available from March 14, 2023. NBA 2K18
Online
There are currently 0 members and 105 guests on the website right now. Who's On?
Activity in the past 10 minutes: 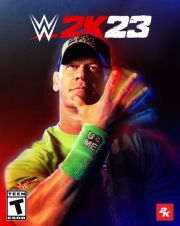