Simon Pegg, Lesley Nicol and more are in the game

Warner Bros. Games and Avalanche Software have revealed some of the voice talent for Hogwarts Legacy, the upcoming open-world action RPG.

Actor Simon Pegg plays Phineas Nigellus Black, the Headmaster of Hogwarts School of Witchcraft and Wizardry. From a long lineage of Slytherins, Headmaster Black is hated by the students, for whom he also has a great disdain. As fifth-year students entering Hogwarts for the first time, Sebastian Croft and Amelia Gething play the two voice options for the game’s playable avatar.

Lesley Nicol voices a key character in the game, Professor Matilda Weasley. A Gryffindor, she is the Deputy Headmistress of Hogwarts who aids the player in catching up with the other students by giving them the Wizard’s Field Guide and showing them the Room of Requirement. Kandace Caine plays Professor Onai who was once a Divination teacher at Uagadou. The professor of Astronomy, Professor Satyavati Shah, is voiced by Sohm Kapila.

Luke Youngblood, who played Lee Jordan in the film series, returns to provide the voice of Everett Clopton, a Ravenclaw and an underachieving rule-breaker and prankster. Asif Ali voices another Ravenclaw student, Amit Thakkar. Jason Anthony voices both Nearly Headless Nick and the Sorting Hat.

Hogwarts Legacy is set for launch on PC, Xbox Series X|S, and PS5 on February 10, followed by PS4 and Xbox One on April 4. Disney Infinity: Marvel Super Heroes
Online
There are currently 0 members and 93 guests on the website right now. Who's On?
Activity in the past 10 minutes: 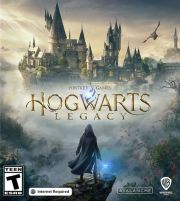 All videos for Hogwarts Legacy (6)