NACON and KT Racing have announced the launch of WRC Generations, the official video game of the FIA World Rally Championship.

WRC Generations represents a turning point for the franchise. Not only is it the first rally game to include hybrid cars and all the changes they bring to the competition, WRC Generations also includes all content that appeared in previous games in the franchise, while introducing some major new features such as Leagues mode, Team creation, a Livery catalogue, and Cross-platform play.

The game promises 165 special stages over 750 kilometers of track, with the most cars and events ever in the franchise.

WRC Generations is out now on PlayStation 4, PlayStation 5, Xbox One, Xbox Series, PC, and on 1 December 2022 on Nintendo Switch. 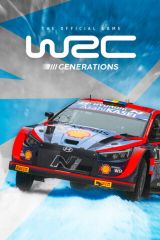 All videos for WRC Generations (3)