The sport simulation series expands to more platforms this year

Sports Interactive and SEGA have announced Football Manager 2023, set to launch on November 8.

For the first time, this football management simulation series will arrive on PS5. After a year’s absence, the Touch series also returns to Apple devices through the Apple Arcade platform.

From today until launch, fans who pre-purchase FM23 (for PC and Mac), from a SEGA-approved digital retailer will receive a 20% discount and the chance to kick-off their managerial career ahead of schedule with Early Access to FM23. Pre-purchasing via the Microsoft Store will be available soon.

Early Access will be available via Steam, the Epic Games Store, and the Microsoft Store roughly two weeks prior to the official street date, and single player careers started in that period can be carried across to the final game. Fans purchasing physical copies of FM23 will notice that this year’s edition does not include a disc. Instead, every pack contains a unique code that, once redeemed, enables play via Steam, Epic Games or the Microsoft Store.

Formerly titled the Xbox edition, FM23 Console joins FM23 in being available on the Microsoft Store and Xbox Game Pass from Day One. In addition to Apple Arcade, Football Manager 2023 Touch will also be available on Nintendo Switch. Aliens vs Predator
Online
There are currently 0 members and 74 guests on the website right now. Who's On?
Activity in the past 10 minutes: 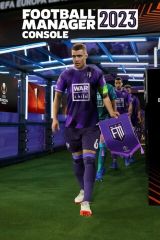