KeokeN Interactive and publisher Frontier have announced that Deliver Us Mars has been delayed.

Originally planned for a September launch, the space adventure game will now be out on February 2, 2023. In a statement, the developers said "It is important to use that this experience is the best it can be at launch. With this in mind, we've collectively made the difficult decision to move the release date in order to ensure that we are able to live up to that ambition."

Deliver Us Mars tells the story of Kathy Johanson, who joins the crew of the Zephyr space shuttle on a desperate mission to the Red Planet. Their goal is to save a rapidly-declining Earth by retrieving vital colonization vessels known as the ARKs, which the shadowy organization ‘Outward’ stole years earlier. It is a follow-up to Deliver Us The Moon.

The game is planned for launch on PC and last/current gen consoles. Deliver Us The Moon
Online
There are currently 0 members and 103 guests on the website right now. Who's On?
Activity in the past 10 minutes: 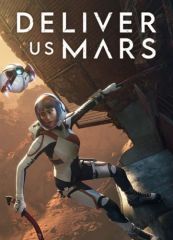 All videos for Deliver Us Mars (1)