On November 16, Xbox 360 exclusive “Crackdown 2” will get its most fun addition yet with the release of the “Deluge” Game Add-on, available for download on Xbox LIVE Marketplace.

The new Game Add-on delivers a frenetic new co-op arcade mode called “Deluge” which pits up to four players against increasingly more challenging waves of denizens from Pacific City. The Capture the Orb mode, which introduces a “Crackdown” twist to capture the flag, will have you hurtling buildings and dodging rockets as you race to score, as well as several updates for “Crackdown 2” affecting weapons, vehicles and more.

The “Deluge Pack” will be available in both trial and premium versions. The trial version includes the complete sixteen-player Capture the Orb mode as well as a single player, sample version of the “Deluge” co-operative mode. The premium version consists of all Deluge content including the complete Deluge co-op mode, new achievements, avatar awards, as well as the sixteen-player Capture the Orb mode for 560 Microsoft Points. 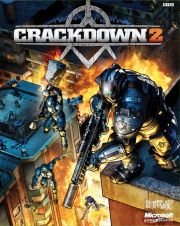