Madden NFL 23 is headlined by the FieldSENSE Gameplay System - a new foundation for consistent, ultra-realistic gameplay - only available on PlayStation 5 and Xbox Series X|S versions, players will have more control in their hands at all positions in every part of Madden NFL 23.

FieldSENSEleverages animation branching technology to enable Hit Everything, which redefines the physical interactions during the play allowing players to fight for every inch and change the outcome of tackles. It also provides new mechanics such as 360 Cuts, giving players the ability to change direction on a dime while controlling ball-carriers, and Skill Based Passing, a new way to pass that offers players control to place the ball exactly where they want, with the power they want.

Hundreds of new player and coach likenesses have also been scanned for launch, with more delivered all season long. Plus, there are new player-focused 4K touchdown cameras that recreate the latest NFL broadcasts.

Face of the Franchise: The League is back with a sharper focus on building a legendary NFL career across five skill positions, including cornerback for the first time, and the goal of joining the coveted Madden NFL 99 Club.

More details on Madden NFL 23 will be revealed throughout the summer. Madden NFL 23 is developed in Orlando, Florida and Madrid, Spain by EA Tiburon and will be out for PlayStation 4, PlayStation 5, Xbox One, Xbox Series X|S, and PC. Party Hard
Online
There are currently 0 members and 66 guests on the website right now. Who's On?
Activity in the past 10 minutes: 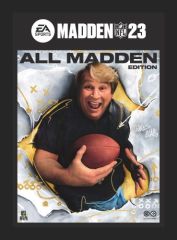