No More Heroes coming to PS3 next year

Konami announced today that No More Heroes: Heroes' Paradise is coming to North America and will be compatible with Sony's new PlayStation Move controls. Developed by AQ Interactive, the game will be available exclusively for PlayStation 3.

Using either a normal PlayStation 3 controller or the PlayStation Move motion-detecting unit, players have access to a wide range of physical assaults and katana attacks, with each bout tracked by a dynamic camera. By varying the grip and control of the Beam Katana and the timing of their attacks, players have a wide range of moves at their disposal to help Travis battle and defeat his enemies.

Players will also have the opportunity to encounter additional boss characters that were not available in the original episode but will be on the PlayStation 3 version of the game.

No More Heroes: Heroes' Paradise is slated to release in 2011 exclusively for the PlayStation 3.

Resident Evil: Operation Raccoon City
Online
There are currently 0 members and 143 guests on the website right now. Who's On?
Activity in the past 10 minutes: 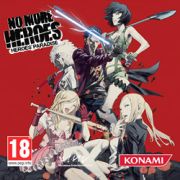