Developer and publisher Rebellion has announced that Sniper Elite 5 is now available.

Sniper Elite 5 takes place in the events around D-Day in France, 1944, as Karl Fairburne joins a covert US Rangers operation to weaken the Atlantikwall fortifications along the coast of Brittany. There he makes contact with French Resistance, and they begin to uncover a secret Nazi plot that threatens to turn the tide of the war back in the Nazi’s favor: Operation Kraken. It is now down to Karl to reveal exactly what the Axis forces are planning and end Operation Kraken, and the mastermind behind it, Abelard Möller, before it can be launched.

Karl can now use zip lines, slide down slopes and shimmy along ledges to reach the perfect vantage point, or to sneak past sharp-eyed enemies. Enhanced climbing abilities now allow you to explore hidden areas in the game map and unlock alternative routes. 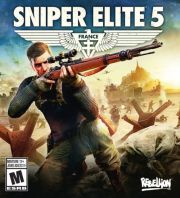