Warhammer 40,000: Darktide out this September

A launch date has been set for co-op game

Independent developer Fatshark has announced that Warhammer 40,000: Darktide is planned for release on September 13, 2022.

Following up on the Warhammer: End Times - Vermintide franchise, Darktide is a 4-player co-op action game set in the hive city of Tertium. Fight together with your friends against hordes of enemies. Players will not be able to hide behind lethal ranged weapons; they'll need to combine both FPS and melee skills as they get up close and personal in visceral clashes between Imperium and Chaos factions.

Warhammer 40,000: Darktide will be available on PC and Xbox Series X|S. Warhammer: End Times - Vermintide
Online
There are currently 0 members and 113 guests on the website right now. Who's On?
Activity in the past 10 minutes: 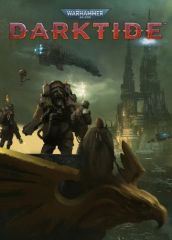