The Sims 3 ships for consoles

The EA Play Label of Electronic Arts announced today that The Sims 3 on PlayStation 3 and Xbox 360 ship to retail stores worldwide this week. With all-new features tailored for each platform including “Karma Powers”, achievement-based gameplay, a seamlessly integrated creation exchange on each of the HD platforms, players now have the opportunity to play with life like never before.

“The Sims fans have been anxiously awaiting the next generation release of console and handheld games for the series, and we’ve been working hard to give them the most robust The Sims experience to date,” said Ben Bell, Executive Producer at EA. “From Karma Powers on all the platforms and the integrated exchange on the HD consoles to the most impressive Create a Sim and customization capabilities on Nintendo DS, fans will be able to experience everything they’ve come to love on the PC now on their consoles.”

The Sims 3 combines the freedom of open world life simulation where players can create Sims – the unique characters found in The Sims games - with distinct personalities and fulfill their desires…or not. On the PlayStation 3 and Xbox 360 platforms, players can now control their Sims lives with the guided gameplay of an all-new achievement system and then share those achievements with the world through their Facebook and Twitter accounts. As they complete challenges and collect dozens of achievements they will earn Karma points – all the while deciding the destinies of their Sims. Karma points can be used to unlock and unleash all-new Karma Powers to the grand benefit or wicked detriment of their Sims making it easier than ever to play with life. The game will also be connected to the worldwide community through a seamlessly integrated creation exchange on each of the PlayStation 3 and Xbox 360 systems.

Developed by The Sims Studio, The Sims 3 for the Xbox 360 and PlayStation 3 are rated T for Teen. Each ships to retailers nationwide on October 26. 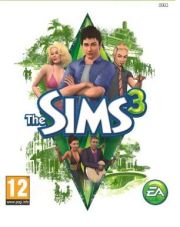 Our Review of Sims 3
85%
Great
Reviewed on PC
"The Sims 3 improves on the franchise in fresh and interesting new ways, but intentional lack of content and some underdeveloped ideas keep it from reaching the heights of the original"
Game Ranking
Sims 3 (PC) is ranked #185 out of 1624 total reviewed games. It is ranked #11 out of 69 games reviewed in 2009.
184. Desperados: Wanted Dead or Alive
PC
185. Sims 3