Next game in the arcade skateboarding series has a release date

Private Division and Roll7 have announced that OlliOlli World will launch on February 8, 2022.

OlliOlli World is a skateboarding action-platformer. Flip and flow through the vivid and vibrant world of Radland, meeting colorful characters as you grind, trick, and air your way to discover the mystical skate gods on your quest for Gnarvana.

OlliOlli World will launch digitally on PlayStation 5 and PlayStation 4, the Xbox Series X|S and Xbox One consoles, PC via Steam, and Nintendo Switch console. 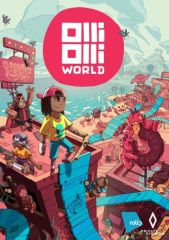 Our Review of OlliOlli World
73%
Good
Reviewed on PC
"2D skating franchise continues to Heelflip along"
Game Ranking
OlliOlli World (PC) is ranked #986 out of 1857 total reviewed games. It is ranked #44 out of 111 games reviewed in 2022.
985. Nobody Saves the World
Xbox One
986. OlliOlli World

All videos for OlliOlli World (1)