Electronic Arts has announced the launch of NHL 22, the first EA SPORTS NHL game powered by the Frostbite engine.

The new engine promises overhauled player likenesses and uniform micro-details. Through the new broadcast elements, players can see game stats integrated directly into the action through overlays on environment surfaces.

Superstar X-Factors make the best players feel distinctly like their real-life counterparts. This unique ability system elevates the most elite players in the league, making their presence on the ice more influential than ever with traits based on their real-world skills.

Be A Pro takes players deeper into the game with fresh multi-season storylines with a re-designed progression system that now includes X-Factors, and the ability to enhance characters based on skill and play style. The World of Chel has been streamlined with a new hub and a revamped Party Flow that makes migrating from one game to another with friends easier.

In early December, a new game update will add Roster Sharing, the long-awaited community feature that gives players the ability to download and distribute their top player rosters to use in Franchise mode. 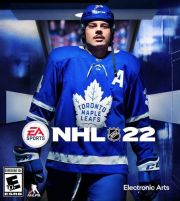