Featuring a variety of whimsical characters from across the franchise, players will be able to dash to the finish as the game’s namesake and star, Chocobo and friends, across Final Fantasy series locations.

The game promises Story and Custom Races, survival races in a bracket-style tournament, which can support up to 64 players. Select modes support online and/or local multiplayer. By collecting magicite, found within Magic Eggs scattered around the various tracks, racers will be imbued with magic, such as Fire or Aero, which can be used against their fellow racers to give them a competitive edge.

Chocobo GP will be available for Nintendo Switch in 2022. 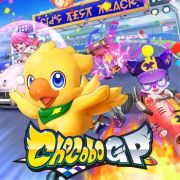 All videos for Chocobo GP (2)