New space-shooter will be out this year

Deep Silver and developer FISHLABS have announced that dark space-shooter Chorus will launch on December 3.

In Chorus you take control of ace pilot Nara, a fugitive on a quest to destroy the dark cult that created her while facing her haunted past along the way. Along with her sentient starfighter, Forsaken, she explores ancient temples, engaging in zero-g combat and fighting to unite the resistance forces against the cult (known as the Circle) and their leader, the Great Prophet.

Fans who pre-order will receive the Elder Armor skin set. This cosmetic pack can be applied to Forsaken as well as all three of the starting weapons; the Gatling Gun, Missile Launcher, and Laser Cannon.

Next-gen console versions of the game will support 4K resolution at 60fps.

Chorus will be available on Xbox Series X and Xbox One, the PlayStation 5 and PlayStation 4, and PC. 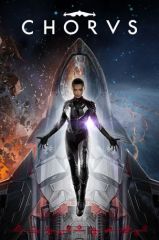 All videos for Chorus (3)