Bethesda has announced that Deathloop is available now.

Deathloop is out for PC and PS5. 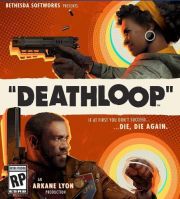