Free Games with Gold for December 2020

Puzzles and action to wrap up the year

Microsoft has announced the Xbox Games with Gold lineup for December 2020.

First up, subscribers can get The Raven Remastered from December 1 to 31. Play as Constable Anton Jakob Zellner in 1964 London, who is on the hunt for the legendary master thief, The Raven. Classic murder mystery locations, and a compelling cast of characters are featured in this crime story whodunit.

Later, from December 16 to January 15, members can get Bleed 2 - is a relentless arcade action game about shooting, dodging, reflecting bullets, slowing time, and lots and lots of bosses. As the pink-haired heroine, Wryn, defend the world from an invading force of villains in seven intense levels with over twenty-five boss battles.

Another free title offered is Saints Row: Gat out of Hell, from December 1 to 15. Players take on the role of Johnny Gat as he is sent into hell via a nefarious spirit board incident and left to combat demons, the horrors of the underworld (including prominent historical figures) and, of course, the Devil himself.

Last but not least, available December 16 to 31 is a free copy of Stacking. Explore a world inhabited by living Russian dolls and jump inside them to use their special abilities to solve a wide variety of riddles and challenges, in this 3rd-person puzzle adventure game. 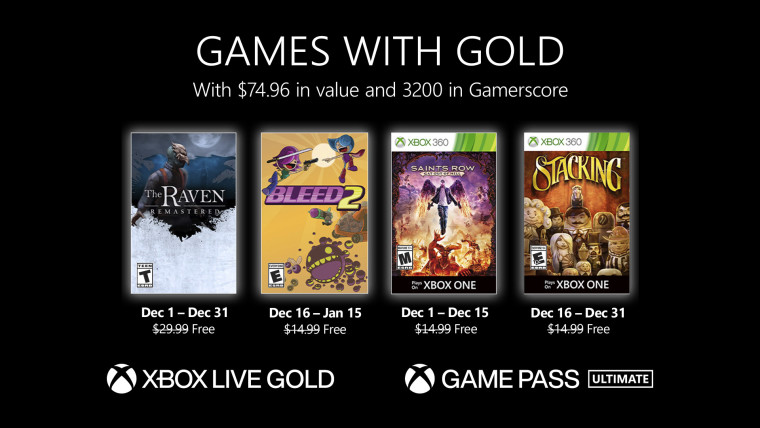 Madden NFL 21 predicts Kansas City Chiefs to win Super Bo...
Simulation of the sporting event predicts a repeat winner
26 days ago
Marvel's Avengers next-gen version out in March
The edition arrives alongside new playable Super Hero
14 days ago
Crash Bandicoot 4 coming to more platforms
Switch, PC, and next-gen consoles are getting the platformer soon
21 days ago
Free Games with Gold for March 2021
A variety of action and adventure offered next month
6 days ago