Free Games with Gold for April 2020

Microsoft has announced the Xbox Games with Gold lineup for April 2020.

First, from April 1 to 30 on Xbox One, members can get their free copy of Project CARS 2. The racing game promises an expanded roster of cars and tracks, and additional racing disciplines – including ice, dirt, snow, and mud racing.

Later, from April 16 to May 15 on Xbox One members can grab Knights of Pen and Paper Bundle. In this collection of the game and its sequel, inhabit a world of chivalry, class warfare, and semi-appropriate cultural references — while complaining loudly to the Game Master.

Further, from April 1 to 15 on Xbox One and Xbox 360 members get Fable Anniversary. All new textures, models, and lighting were used to retell the story of the pioneering game where every character choice has a direct consequence.

And later, from April 16 to 30 on Xbox One and Xbox 360 members can get Toybox Turbos. Collect and customize 35 vehicles on 18 crazy tracks in a game that reboots the classic table top racing experience. 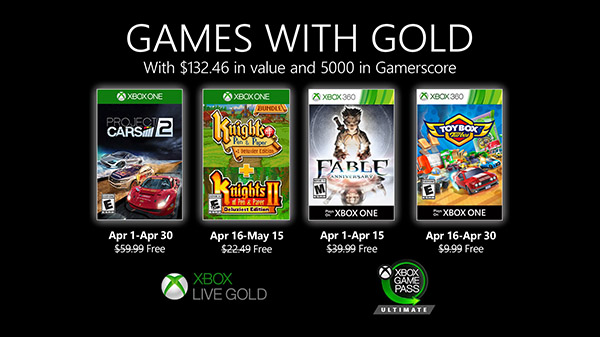 Grand Theft Auto V
Online
There are currently 0 members and 72 guests on the website right now. Who's On?
Activity in the past 10 minutes: