Iceborne expansion for Monster Hunter World out in September

Capcom has announced that Monster Hunter World: Iceborne expansion will launch September 6, 2019 for Xbox One and PS4, with PC version to follow later.

The Iceborne expansion promises a new story that picks up after the main game and takes hunters to a newly discovered chilly locale called Hoarfrost Reach. Iceborne is set to offer the largest region in the game so far. Iceborne also introduces the new higher difficulty Master Rank, a brand-new quest tier that makes new and existing monsters more ferocious than ever.

The extreme cold is also the setting for brand new frigid climate foes such as the horned brute wyvern Banbaro and the snow-buried Beotodus. Leading the pack in Iceborne is the mysterious new flagship monster Velkhana, an elder dragon with powerful ice attacks.

The Slinger can now be used while the main weapon is drawn, regardless of weapon type. New features have also been added for the Slinger such as the Clutch Claw used to grapple onto monsters with more direct control and the Flinch Shot which unloads Slinger ammo to stun monsters. Each of the 14 weapon types will also get new combos and new elements.

Monster Hunter World was released last year and hasbecome the best-selling Capcom title of all time with more than 12 million units shipped worldwide, adding to the series total of more than 53 million units to date. 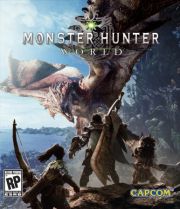