An enhanced re-release Persona 5 is on the way

ATLUS has announecd Persona 5 Royal, an enhanced release of JRPG Persona 5, is coming next year.

Persona 5 Royal expands on the world of Persona 5, introducing a host of new characters, gameplay features, and diving deeper into the personal lives, as well as the trials and tribulations, of the Phantom Thieves. Players will get to experience an all-new third semester at Shujin Academy.

Persona 5 Royal will release in the West in 2020, on PlayStation 4. 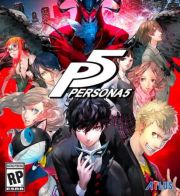