EA Sports is proud to celebrate the tenth anniversary of its popular football management game with the announcement of FIFA Manager 11 – a leap forward in virtual football management. FIFA Manager 11 includes a host of new feature enhancements including an improved tactics system, a much more realistic transfer market and an extended online mode that offer easier access to novice players while providing a deeper experience for existing fans. FIFA Manager 11 allows gamers to take control and show the highly paid professional coaches how it’s really done.

“We want to provide our fans with a completely unique football management experience in this anniversary year for the franchise with all the great new innovations that reflect actual real life football management included in FIFA Manager 11”, Gerald Köhler, lead designer of the FIFA MANAGER series explains. “We are very proud that we are now developing our tenth FIFA Manager game in succession. This would not have been possible without the support of our superb and still growing fan base.”

FIFA Manager 11 delivers a host of improvements aimed at making the game the most authentic of the series to date, while lowering the barrier of entry for first time players. A new and highly polished pitch screen allows the manager to quickly set instructions for individual players as well as for the entire team’s playing style - including increased control of set-pieces and offensive/defensive player movement orders.

Further enhancements include new cup draws, a special status for Derby matches, a revised player level system, a new experience system, a new player search system and a World Cup tournament that can be played separately to the main game. In addition, the transfer period has been changed to mirror the real life football calendar.

The online mode which was successfully launched in FIFA Manager 10 has been considerably expanded and an action-card system has been implemented, allowing even more direct influence on the game’s flow.

EA Sports FIFA Manager 11 is developed by Bright Future in Cologne. The game will be released for the PC in five languages this fall.

FIFA 15
Online
There are currently 0 members and 143 guests on the website right now. Who's On?
Activity in the past 10 minutes: 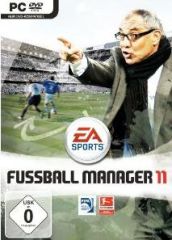