Blizzard Entertainment Begins Closed Beta Test for the next expansion

Blizzard Entertainment announced today that the closed beta test for Cataclysm, its highly anticipated new expansion for World of Warcraft, has begun. The company has started issuing invitations to participate in the testing process to a wide range of players from around the world who signed up via their Battle.net accounts. While enjoying an early look at the game, beta testers will provide valuable feedback to help Blizzard Entertainment find bugs, address balance issues, and polish the new content.
"Our focus with Cataclysm has been to build on the knowledge we've gained through the previous expansions to deliver the best, most compelling World of Warcraft content for our players to date," said Mike Morhaime, CEO and cofounder of Blizzard Entertainment. "Gathering focused feedback during the beta test will go a long way in helping us reach that goal when we launch Cataclysm later this year."
Cataclysm is the third expansion for World of Warcraft, the most popular subscription-based massively multiplayer online role-playing game in the world. The first two expansions, The Burning Crusade and Wrath of the Lich King, each shattered PC game sales records upon their release. In Cataclysm, the face of Azeroth will be forever altered by the return of the corrupted Dragon Aspect Deathwing. Players will explore once-familiar areas of the world that have now been reshaped by the devastation and filled with new adventures. In an effort to survive the planet-shattering cataclysm, two new playable races - worgen and goblins - will join the struggle between the Alliance and the Horde. As players journey to the new level cap of 85, they'll discover newly revealed locations, acquire new levels of power, and come face to face with Deathwing in a battle to determine the fate of the world. 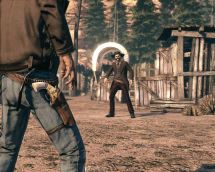 Call of Juarez: Bound in Blood
Online
There is currently 1 member and 151 guests on the website right now. Who's On?
Activity in the past 10 minutes: