The RPG will arrive on more platforms later this year

Obsidian Entertainment has announced that Pillars of Eternity II: Deadfire is coming to consoles.

The RPG sequel is set to appear on PlayStation 4, Xbox One, and Switch later in 2018. The port will be handled by developer Red Cerberus.

In Pillars of Eternity II: Deadfire players will embark on a dangerous voyage of discovery to become master of the seas as they command their ship across the new open world region of the Deadfire. Pillars II builds on the foundation of classic RPG gameplay with vastly improved graphics, deeper game mechanics and a whole new handcrafted adventure where choices matter.

Pillars of Eternity II: Deadfire will first make its debut on PC this April. 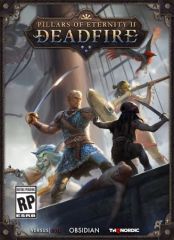