New strategy title in development for next year

SEGA has announced the new historical strategy game Thrones of Britannia, the first title in the new 'A Total War Saga' series from its studio, Creative Assembly.

It is 878 AD, and the Viking Invasion of Britain is over. The Norse warlords are firmly established, but the ambitious kings of England, Ireland, Scotland and Wales have aspirations of their own – not least the great King Alfred of Wessex.

A Total War Saga: Thrones of Britannia will be available for PC in 2018. 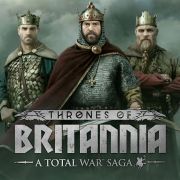 All videos for Total War Saga: Thrones of Britannia (8)