Sony San Diego Studio have announced the first details and special editions for MLB The Show 18, coming next year.

The game's cover star will be Aaron Judge. Making his MLB debut with the New York Yankees in 2016, Judge hit a home run during his career’s first at bat, but this was only the beginning. Judge went on to have a record-breaking rookie season in 2017, was named an All-Star, and won the Home Run Derby, overcoming a brutal 22 homer first-round and hitting a total of 47 throughout the derby.

In Canada, the game will feature an exclusive cover with Marcus Stroman. Stroman was drafted in the 1st round in the 2012 Major League Baseball Draft by the Toronto Blue Jays and made his Major League debut on May 6, 2014 and made his first Major League start on May 31, 2014, pitching six innings and surrendered only one earned run on five hits, striking out six and issuing no walks to earn the win over the Kansas City Royals.

Those who pre-order will receive 10 additional Standard Packs and 1 Legend card. In addition, pre-ordering at GameStop or PlayStation Store will get you Early Access to the game with our First Pitch Weekend. With this, you’ll be able to pick up or download your copy on March 23, a full four days before the regular release on March 27.

There will also be an MLB The Show 18: All Rise Edition (GameStop/EB Games Exclusive). It includes a limited All Rise 9FIFTY snap back cap for $99.99 USD/$129.99 CAD, plus a Limited Edition MVP Edition Steel Book and in-game content. 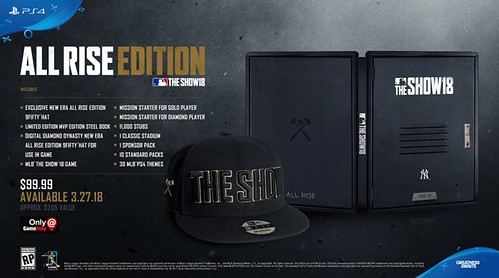 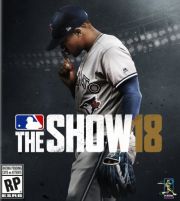 814. The Aquatic Adventure of the Last Human
Xbox One
Related Games