Third expansion will release in December and January

The third Battlefield 1 expansion, Turning Tides, is being released in December 2017 and January 2018. As part of the Premium pass, the expansion is split in half, with two maps released in each stage.

In December, players will get access to Cape Helles and Achi Baba, both maps focusing on the Gallipoli assault by the British forces against the Ottoman Empire. There will also be a Gallipoli Operation that links these two maps.

In January, the maps Heligoland Bight and Zeebrugge will be released. The former features a war at sea with dreadnaughts, destroyers, and aircraft fighting each other while troops battle near the red cliffs. The other map is located around a Belgian port in rough waves.

The DLC also has six new guns and 3 melee weapons, including the Carcano M91 Carbine and a grappling gun (melee attack only). There is also a new L-Class destroyer naval vessel and a new Airship. Conquest Assault is also being added. British Royal Marines will make an appearance as a faction in the January half of the DLC.

Battlefield 1 released back in October 2016 and its fourth and final DLC, Apocalypse, is due early next year. 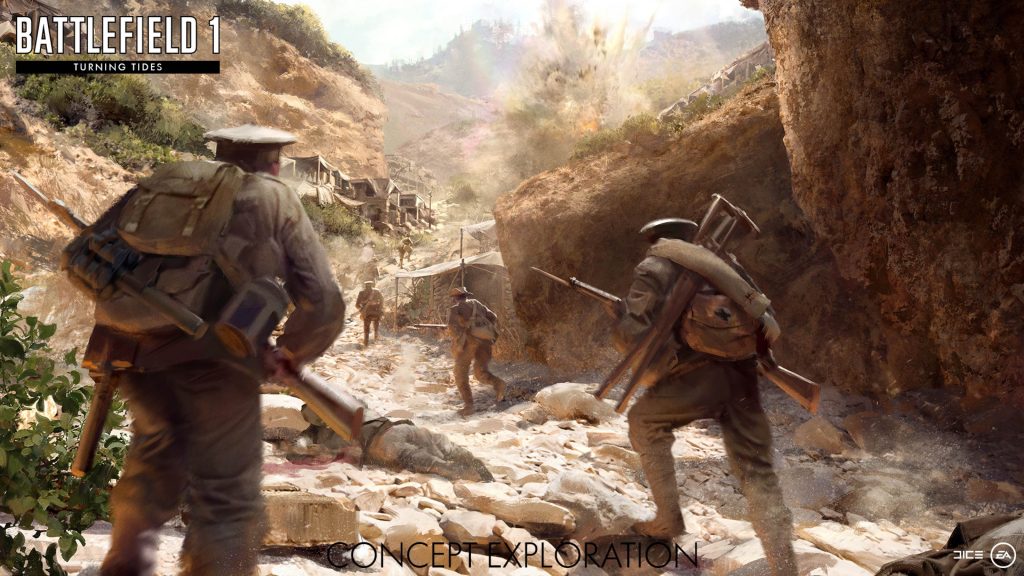 Battlefield 1 Apocalypse DLC coming next month
Battlefield 1 Turning Tides DLC out next month
In the Name of the Tsar DLC coming to BF1 on September 5
Prev:
Season Pass details for Fractured But Whole
Next:
More information provided for the Switch version of Doom

Online
There are currently 0 members and 227 guests on the website right now. Who's On?
Activity in the past 10 minutes:

Our Review of Battlefield 1
87%
Great
The Verdict:
"Confronting action on beautiful and varied online battlegrounds"
Game Ranking
Battlefield 1 is ranked #89 out of 1689 total reviewed games. It is ranked #4 out of 138 games reviewed in 2016.
88. Undertale
PC
89. Battlefield 1