Free Games with Gold for September 2017

Racing, shooting, and an atmospheric adventure on offer next month

Microsoft has announced the Xbox Games with Gold lineup for September 2017.

Subscribers on Xbox One will get a free copy of Forza Motorsport 5: Racing Game of the Year Edition, available September 1 to 30. This Xbox One launch title includes a new graphics engine with 17 tracks, and the Top Gear Car Pack with an additional 10 cars to race and customize.

Available September 16 to October 15 on Xbox One, the second free title is Oxenfree. In this teen supernatural thriller, you accidentally open a ghostly portal during an overnight party, releasing unknown paranormal forces. You must work with the others in your group to figure out what the forces are and how to stop them.

Available September 1 to 15 on Xbox One and Xbox 360, subscribers can grab Hydro Thunder Hurricane. Featuring rocket-powered speedboats, dynamic water and crazy scenarios, this is a sequel to the classic arcade boat racer. It features multiple single-player and multiplayer modes and a large selection of boats and courses.

Lastly, from September 16 to 30 on Xbox One and Xbox 360 members can download Battlefield 3. Take advantage of the destructible world around you as you battle your enemies in heart-pounding action. Single-player missions and the multiplayer online battles occur in locations from Europe to the Middle East and North America. 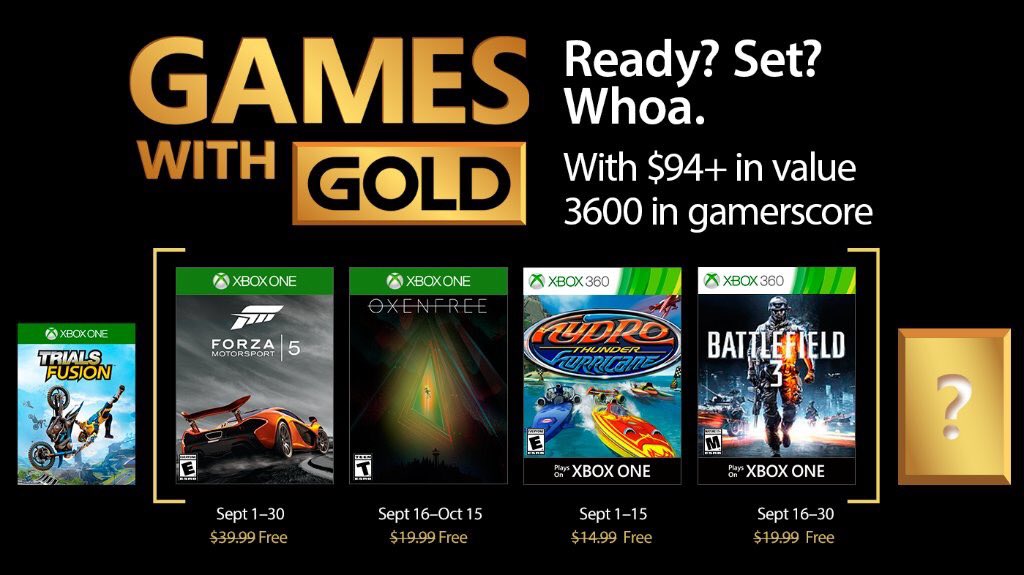 Top Gun: Hard Lock
Online
There is currently 1 member and 140 guests on the website right now. Who's On?
Activity in the past 10 minutes: