THQ Nordic and Piranha Bytes have announced that the upcoming RPG Elex will be out on October 17, 2017.

There will also be a Collector’s Edition for the game, which contains a 10-inch-high figurine of an Alb Mage, a 2-inch amulet in the form of a combat drone, a cloth map, the original score on CD, an artbook, and the game manual.

Developed by Piranha Bytes, creators of the Gothic and Risen series, Elex is an action role-playing game set in a post-apocalyptic science-fantasy universe. From swords and axes to bows, crossbows and harpoons, Elex promises a wide selection of weaponry. Players can find a companion, choose a faction and influence the world.

Elex will be released on PC, Xbox One and PS4. 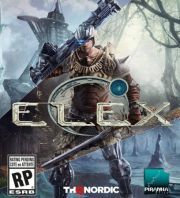 Our Review of Elex
78%
Good
The Verdict:
"A strange but compelling aggregate of RPG tropes that rises above its shortcomings"
Game Ranking
Elex is ranked #622 out of 1795 total reviewed games. It is ranked #48 out of 174 games reviewed in 2017.
621. Plants vs Zombies Garden Warfare 2
Xbox One
622. Elex