The Walking Dead: A New Frontier save import details

Telltale Games have announced new details about how to handle your saves from previous seasons when starting The Walking Dead: A New Frontier.

Two options will be available. First, Start New Story is for people who haven’t played The Walking Dead before, or don’t recall their previous experience. In this mode, Season Three starts with a Clementine who has lost everyone from the previous Seasons and is left alone with AJ.

The second option is Continue Your Story, which further offers two possibilities. Inside of Season Three, there is a “story generator” option where you're asked a series of questions that help hone in on your Clementine. This will select one of 42 different “starting points”, that include not just your ending but also the relationships you had with different characters and the style of player you are.

The other possibility for a Continue is to use your Season 2 save game. If you play on the same device as before, the save will be automatically imported. If you want to play on a different device, then Season Two was recently updated to include Telltale Cloud Saves. You’ll need to update your app, launch Season Two and create a Telltale Account. Then you can enable Cloud Saves and upload your Season Two save to the cloud. When you launch Season Three, you’ll be able to login to your Telltale Account and download the Cloud Save.

Season 3 will not be coming to PS3 and Xbox 360 - so this is how to migrate your story from one device to another, like moving from PS3 to PS4, or Xbox 360 to Xbox One. It works from any platform to any other platform.

The Walking Dead: A New Frontier will debut next week with two episodes, available on PC, Xbox One and PS4.

The Walking Dead: A New Frontier 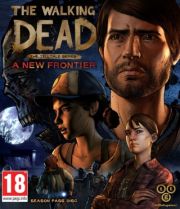 All videos for The Walking Dead: A New Frontier (5)