Fans get to choose which superstar will appear on cover

EA has revealed that fans will have the power to select the cover star of FIFA 17.

Four previously-announced ambassadors (James Rodriguez of Real Madrid C.F., Anthony Martial of Manchester United, Eden Hazard of Chelsea FC, and Marco Reus of Borussia Dortmund) will go head-to-head in the official FIFA 17 Global Cover Vote. All voting will take place on the official FIFA Cover Vote Website beginning today and running through July 19 at 11:59pm PT. Fans can vote online once per day for their favorite player and earn extra votes by utilizing the auto-share feature with the hashtag #FIFA17CoverReward. The winner will be revealed on the official FIFA Cover Vote website later in July.

FIFA 17’s four cover contenders are also global ambassadors for FIFA 17 and worked with EA SPORTS to influence gameplay and bring innovation to the way players think and move, physically interact with opponents, take set pieces, and use new techniques in attack. 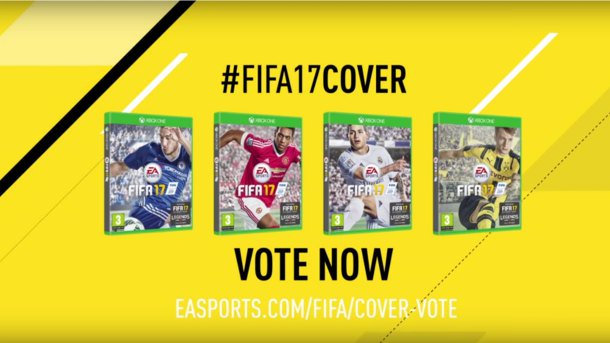