New bundle includes the city building game and all DLC

Kalypso Media has announced the release of Tropico 5 – Complete Collection for PC at $39.99.

You, as El Presidente, will first take control of the infamous island of Tropico during early colonial times and then guide it through the centuries as the world changes and moves ever forward. You must tackle the changing needs of your people, as well as opposing governments and factions, and thus lay the foundations for your own dynasty. As you move through your years in office you can promote members of your extended family on the island to positions of power: such as ambassador, commanding general or even Supreme Ruler, to ensure your legacy thrives through the eras.

Tropico 5 made its debut on PC back in 2014, and was also released on PS4 and Xbox 360. An Xbox One version is still possibly in the works. 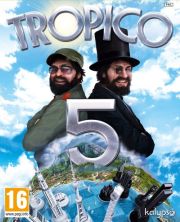