King's Quest Chapter 2 out this month

King's Quest: Rubble Without a Cause expected to launch in two weeks

Sierra has announced that King’s Quest: Rubble Without a Cause, the second chapter of the new King’s Quest series, is expected to launch worldwide on December 15th.

In this latest page in the reimagining of the classic adventure gaming series, King Graham takes players back to his first test as ruler of Daventry. When a band of goblins holds the kingdom hostage, a newly crowned and ill-equipped Graham must lead a rescue to free his people and prove himself the leader they deserve.

In addition, King’s Quest’s first chapter, A Knight to Remember, is free to download on the PlayStation 4 throughout December starting today for PlayStation Plus members.

Developed by The Odd Gentlemen, the new King’s Quest is a five-chapter journey available for PC, Xbox One, Xbox 360, PS3, and PS4. 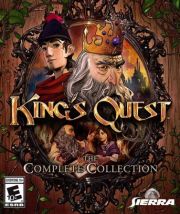 All videos for King's Quest (9)