First expansion for The Witcher 3 debuts in October

Hearts of Stone promises over 10 hours of new adventures

CD PROJEKT RED have announced the release date of Hearts of Stone, the first expansion to The Witcher 3: Wild Hunt.

In Hearts of Stone, Geralt of Rivia is hired to defeat a bandit captain, Olgierd von Everec, a man who possesses the power of immortality. The expansion lets you choose your own way through an adventure that includes recruiting a crew of break-in artists, spending a night partying with a ghost and outsmarting bizarre creatures.

Along with the digital release, gamers will also be able to purchase a special, limited boxed edition of Hearts of Stone (SRP $19.99/19.99€) available at selected retailers worldwide. The box contains a digital download code for the expansion, two physical decks of Gwent, the card game set in the world of The Witcher, and a detailed manual explaining the rules.

The Witcher 3 was released earlier this year on PC, Xbox One, and PlayStation 4. 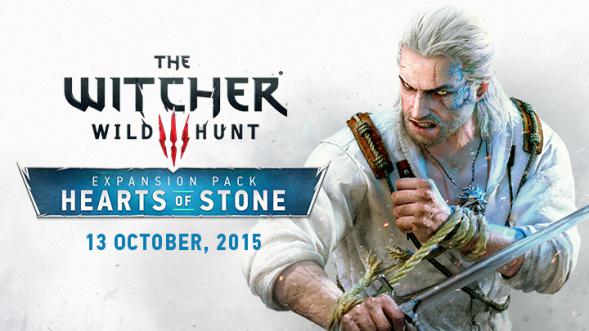 Our Review of Witcher 3
91%
Superb
The Verdict:
"A high water mark not only for the Witcher series, but for the entire genre of open world RPGs"
Game Ranking
Witcher 3 is ranked #14 out of 1715 total reviewed games. It is currently our top ranked game released in 2015! (110 in total)
13. World In Conflict
PC
14. Witcher 3