Square Enix Ltd., the publisher of Square Enix interactive entertainment products in Europe and other PAL territories, today announces SUPREME COMMANDER 2, created by critically-acclaimed developer Gas Powered Games, will be available on the Xbox 360 video game and entertainment system from Microsoft from tomorrow, 1st April 2010. The game is also available on PC-DVD.
SUPREME COMMANDER 2 is the next instalment in the award-winning SUPREME COMMANDER franchise, set 25 years further into the future. Featuring numerous game enhancements, an in-depth campaign mode, online multiplayer and a unique storyline, the game represents a new dimension in RTS gaming.
"The partnership with Square Enix has been a highlight of my career," said Chris Taylor, Founder and Creative Director of Gas Powered Games. "I couldn’t be more proud of what the team has accomplished, as the game has continually exceeded all of my expectations throughout its development."
Larry Sparks, Vice President Brands PAL Region of Square Enix Ltd. comments, “SUPREME COMMANDER 2 has already achieved fantastic recognition across media and the RTS community winning E3 Best Strategy Game 2009 from IGN, 1UP and GameSpot. We’re thrilled to be working with Gas Powered Games to release a game that really pushes the genre’s gameplay and storyline expectations to a new level.” 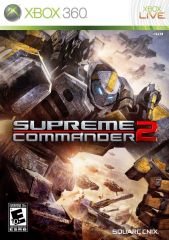 Our Review of Supreme Commander 2
72%
Good
Reviewed on PC
"A reduction in the massive scale means less travel times and quicker matches. Multiplayer can be quite enjoyable but the campaign misses the mark."
Game Ranking
Supreme Commander 2 (PC) is ranked #917 out of 1633 total reviewed games. It is ranked #82 out of 107 games reviewed in 2010.
916. Operencia: The Stolen Sun
Xbox One
917. Supreme Commander 2