In Prey, gamers enter an unpredictable world where nothing can be taken for granted. You'll become Tommy, a Cherokee garage mechanic stuck on a reservation, going nowhere in life. When an otherworldly crisis awakens spiritual powers from his long-forgotten birthright, he & his girlfriend are abducted by aliens who need him to save the planet -- even if he's not sure he can. 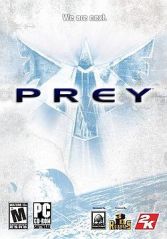