Bionic Commando Rearmed is an enhanced remake of the 1988 Nintendo Entertainment System version of Bionic Commando. It was developed by GRIN and published by Capcom. The remake serves as a prelude to the 2009 video game Bionic Commando. Rearmed follows Nathan "Rad" Spencer, a commando with a Bionic left arm that can extend and be used as a weapon, or to swing from various objects. 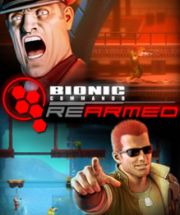